Excellence: What are the three ingredients needed to achieve it?

Excellence is never an accident. It’s always the result of the commitment to intelligent practice and effort—even during the mundane, and professional, subjective coaching. And, surprisingly, excellence is possible for any of us to achieve with deliberate practice, patience at mastering small details, and working with a professional, subjective coach.

In less than 75 days the world will be focused on Rio De Janeiro, home of the 2016 Summer Olympics—or the XXXI Olympiad, if you prefer. We love the pageantry and the competition. But most of all—as in any sporting competition—we love the personal stories of the athletes; their dedication, the overcoming of obstacles, their pathway to achieving excellence—sometimes in the shadow of setbacks. Sports offers lessons for even the least sports-inclined. 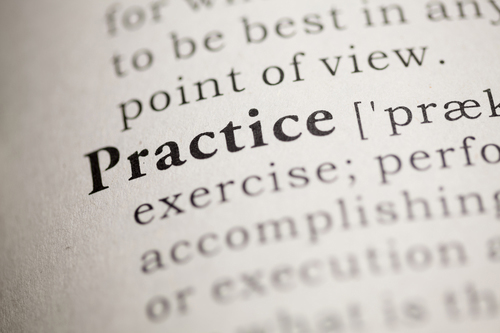 We can all imagine the hours upon hours of practice an athlete of Olympic caliber is subject to. But athletes who achieve excellence practice differently than you or I would. I’d be tempted to throw more and more hours and effort at becoming good—and certainly, that plays a roll—but not all.

Excellent athletes know that spending hours and hours of doing the same thing over and over has its limits. Instead, they work at making qualitative improvements in their efforts. Practicing for 10,000 hours—or roughly ten years—is believed to turn you into a master.

But the truth is, not all practice makes perfect. You need a particular kind of practice, called deliberate practice, to develop excellence.

When most of us practice, we focus on things we already know how to do. We focus on practicing those things over and over.

Deliberate practice is different. It entails considerable, specific, and sustained efforts to do something that you can’t do well—or maybe do at all. Research across many domains shows that it’s only by working at what you can’t do that you turn into the expert you want to become.

It’s not by doing increasing amounts of work that you become excellent—but rather by changing the kinds of work.

Look at excellent athletes—they move to the top ranks through qualitative jumps: improving their techniques, adjusting discipline and attitude, changing their setting by joining a new team or with a new coach, choosing friends and fellow athletes who work at a higher level. Without such jumps, no major improvements take place.

Face it, the path to excellence is pretty mundane

Daniel Chambliss, who wrote “The Mundanity of Excellence: An Ethnographic Report on Stratification and Olympic Swimmers,” may have said it best: “Superlative performance is really a confluence of dozens of small skills or activities, each one learned or stumbled upon, which have been carefully drilled into habit and then are fitted together in a synthesized whole. There is nothing extraordinary or superhuman in any one of those actions; only the fact that they are done consistently and correctly, and all together, produce excellence.”

In other words, achieving excellence occurs when you sweat the small stuff. Get good at stringing together small things that you’ve improved at one at a time and it will add up to excellence.

Chambliss continues: “The winning of a gold medal is nothing more than the synthesis of a countless number of such little things… the “little things” really do count. We have already seen how a very small difference can produce a noticeable success.”

Back in 1985, Peter Drucker, the dean of modern American business management, wrote in The Effective Executive: “…to be effective also does not require special gifts, special aptitude, or special training. Effectiveness as an executive demands doing certain—and fairly simple—things. It consists of a small number of practices.”

Bob Nardelli, CEO of Home Depot said, “I absolutely believe that people, unless coached, never reach their maximum capabilities.” Every athlete in Rio this summer will testify to that—but so will most every CEO, recording artist, actor, and on and on. Achieving public and private excellence occurs through coaching, which anyone interested in excellence knows. See: I can do it myself is a lie—don’t believe it!

Having expert coaching makes a difference in a variety of ways. Best of all, they

Jim Rohn said, “Success (or, in our case, excellence) is neither magical nor mysterious. Success is the natural consequence of consistently applying the basic fundamentals.”

For excellence, those fundamentals include deliberate practice, mastering small tasks, and working with a coach.